The substance changes how you think and feel, and that might also alter the way you act and react.

There are several different types of psychoactive drugs, including: Your central nervous system relies on electrical activity to keep you awake, alert, and aware. Depressants slow down each electrical impulse, and that produces a sense of artificial relaxation. Some people feel happy as well as calm.

The National Institute on Drug Abuse (NIDA) says depressants can be useful for people living with anxiety disorders. Some people with insomnia also benefit from treatment with depressants.

But some people choose to abuse these medications, and when they do, they can develop addictions.

Most people with a valid prescription for a depressant don’t abuse it. Researchers say, for example, that just 2 percent of people with a benzodiazepine prescription take high doses and qualify for a diagnosis of drug abuse or addiction.

But it’s not uncommon for people with addictions to mix depressants with other drugs. People addicted to stimulants, for example, might use benzos to help them sleep when the high stretches on for too long and sleep won’t come.

Long-time abuse is dangerous, as depressants tend to linger in the body. People who try to stop cold turkey can develop seizures, and without treatment, they can die during those episodes.

Treatment teams may help by tapering the dose, so the body may have time to adjust to sobriety very slowly. 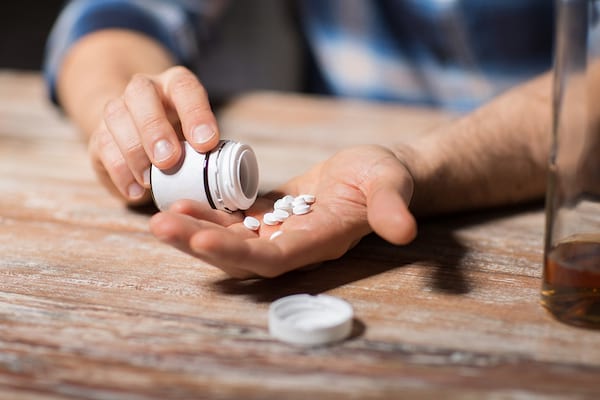 Technically, opioids are depressants. They also suppress activity in the brain and deliver relaxation.

But opioid drugs are special, as they boost the production and release of a drug closely associated with euphoria. And opioids also come with a milder form of withdrawal when compared to their other depressant drug cousins.

Opioid strength varies from prescription type to prescription type, and it isn’t always easy for addicted people to know what’s inside the pills they take. Some people buy what they think is Vicodin, for example, but the tablet they take contains much-stronger fentanyl. The risk of overdose is immense.

Medications like naloxone save lives. As NIDA points out, a naloxone dose rapidly binds to opioid receptors and delivers almost immediate sobriety. Someone dying of an overdose can be revived quickly and then taken to the hospital for follow-up care.

But without quick action, people can slip into coma-like states and die due to opioids.

With heroin abuse comes the risk of:

Withdrawal from opioids is often mild. You might feel sick for several days, and then your body might begin to heal. But during that time, you may be at risk for relapse. Your cravings might grow in intensity, and you might find them hard to ignore.

Medications may ease those sensations, so you might find it easier to focus on your recovery.

Stimulants are made to speed up signaling within the brain. Users describe a “rush” when the drugs take hold, and they feel both invincible and powerful.

These drugs don’t stay in the body long, so it’s not unusual for people to take doses one right after the other to keep the high going.

The majority of these drugs help people with attention deficit hyperactivity disorder (ADHD). But people abuse them in the mistaken belief that the substances will make them smarter, improve their stamina, or both.

NIDA says more than 4 percent of American adults abuse stimulants. Of those people, about half said they used the drug because they wanted to be smarter. There is no evidence that these medications can make that happen.

NIDA says heavy stimulant users can develop withdrawal symptoms, such as depression, insomnia, and fatigue. While no medication can wipe all of these problems away, supportive therapy may make them easier to endure.

Hallucinogens are substances that can deliver sensations that seem very real, even when they’re not. Some hallucinogenic substances have been used for decades, while others are very new.

NIDA says there are two basic types of hallucinogens:

Most of these drugs enter the body orally. You eat them or brew them into tea. Each one works differently, but most disrupt communication between brain cells. Some messages are dropped, and others are amplified. The world seems strange because your brain is not communicating properly.

Hallucinogens can be unpredictable, and it’s not uncommon for users to head into so-called bad trips. Their fears are magnified, and the danger seems very real.

There is often no cure for this issue, and people can get stuck in a terrified state for hours or even days. Some people endure flashback syndromes in which they relive the terror again and again.

Stopping some forms of hallucinogens can lead to withdrawal, but others don’t cause those issues. You may crave the drugs, however, and those feelings can be hard to ignore. Treatment aims to help you build skills to avoid relapse.

How to Find Help for Addiction

Whether you’re reading this article for yourself or someone else, there are plenty of things you can do to fight back against addiction.

Your notes might come in handy as you talk with addiction professionals. You might have a better handle on what’s wrong and what might make it right. That could help to guide your conversation.