Temperatures are expected to plummet across the country in the next couple months.

Footprints to Recovery is standing by to assist homeless people in staying healthy, safe, and warm.

On November 6th, we kicked off our 3rd Annual Socks of Love Campaign, a nationwide initiative to gather warm socks that fit well for homeless people in need.

Additional Details About the Campaign

Our goal for this year is to gather 10,000 pairs of socks by January 15th, and you are invited to take part. Here’s how.

Every Footprints to Recovery location in Colorado, Illinois, Pennsylvania, and New Jersey will have donation boxes available on site for sock donation drop-off.

If you would like to donate socks but do not live near a Footprints to Recovery location or you would prefer to streamline the purchase and drop-off process, you are invited to use our online order form. Through this link, you can order, pay for socks, and have them sent directly to Footprints with just a few clicks.

The first delivery of socks will take place on December 17th. The second is scheduled for January 15th, the last day of the drive.

The socks collected at each location will go to the following organizations:

Not only is the problem of homelessness clearly of grave concern, striking individuals and families alike, it also appears to be on the rise. The numbers above from 2018 were 2 percent higher than in 2017, a number that accounts for an increase of more than 5,800 homeless people in a year.

The numbers of people living in shelters and those taking refuge on the street both increased, but there was a slightly larger increase in unsheltered homeless people.

For those who live on the street, socks are of supreme importance. Socks are protectors against the weather. Especially in cold weather, having no socks or only socks that fit improperly or have holes can result in frostbite, making socks a literal barrier between life and death.

In the states where Footprints to Recovery are launching the 3rd Annual Socks of Love Campaign, there are thousands in need of support. According to the U.S. Department of Housing and Urban Development’s Office of Community Planning and Development 2018 Annual Homeless Assessment Report (AHAR) to Congress, Colorado, New Jersey, Pennsylvania, and Illinois have a long way to go when it comes to helping people experiencing homelessness to connect with the safe housing they need.

In Colorado, there were 7,607 homeless people in 2018. Of this number, more than 1,000 were homeless veterans. This marks one of the highest rates of veteran homelessness in the country, and it is of significant concern.

In general, about 19 out of every 10,000 Colorado residents were experiencing homelessness in 2018. Of the 7,600+ individuals, more than 593 of them were unaccompanied homeless youth and 2,570 were chronically homeless. Another 3,250 people were homeless and in families with children. Not only is Colorado home to more homeless veterans than most other states, the rate of homelessness in general is far higher than in most states and higher than the national average.

In New Jersey, 6,048 people were living on the street in 2018. Of these, about 555 were veterans, and 518 were unaccompanied homeless youth. More than 3,350 people were homeless and in families with children, and another 1,200+ were chronically homeless individuals.

Between 2007 and 2018, there was one notable win: The number of people living on street in New Jersey dropped by more than 32 percent. Additionally, there was almost a 60 percent decrease overall of families living with homelessness across the state during this time period. However, those numbers may not stand. The number of homeless families in New Jersey increased by about 8 percent between 2017 and 2018, marking a trend in the wrong direction.

Despite the drastic drop over the last decade, 10 out of every 10,000 people in New Jersey are experiencing homelessness, adding up to a total of almost 9,400 people. About 82.7 percent of these people found refuge in a shelter, while more than 17 percent were living on the street.

In Pennsylvania, 8,163 residents were without a home in 2018. An estimated 982 were veterans, 1,318 were chronically homeless adults, and 648 were unaccompanied homeless youth.

Additionally, more than 5,300 people were homeless and part of a family that was homeless that included children under the age of 18.

In Illinois, there were 6,752 sheltered and unsheltered homeless people in 2018. About 804 of this number were veterans, and 684 were unaccompanied homeless youth. Another 1,470 were chronically homeless individuals.

Additionally, almost 3,900 people were homeless and part of a homeless family with children.

In total, about 8 in every 10,000 people in Illinois were homeless in 2018, with more than 10,600 people living on the street in total. Over 18 percent of these people were unsheltered, and 81.8 percent were living in shelters. 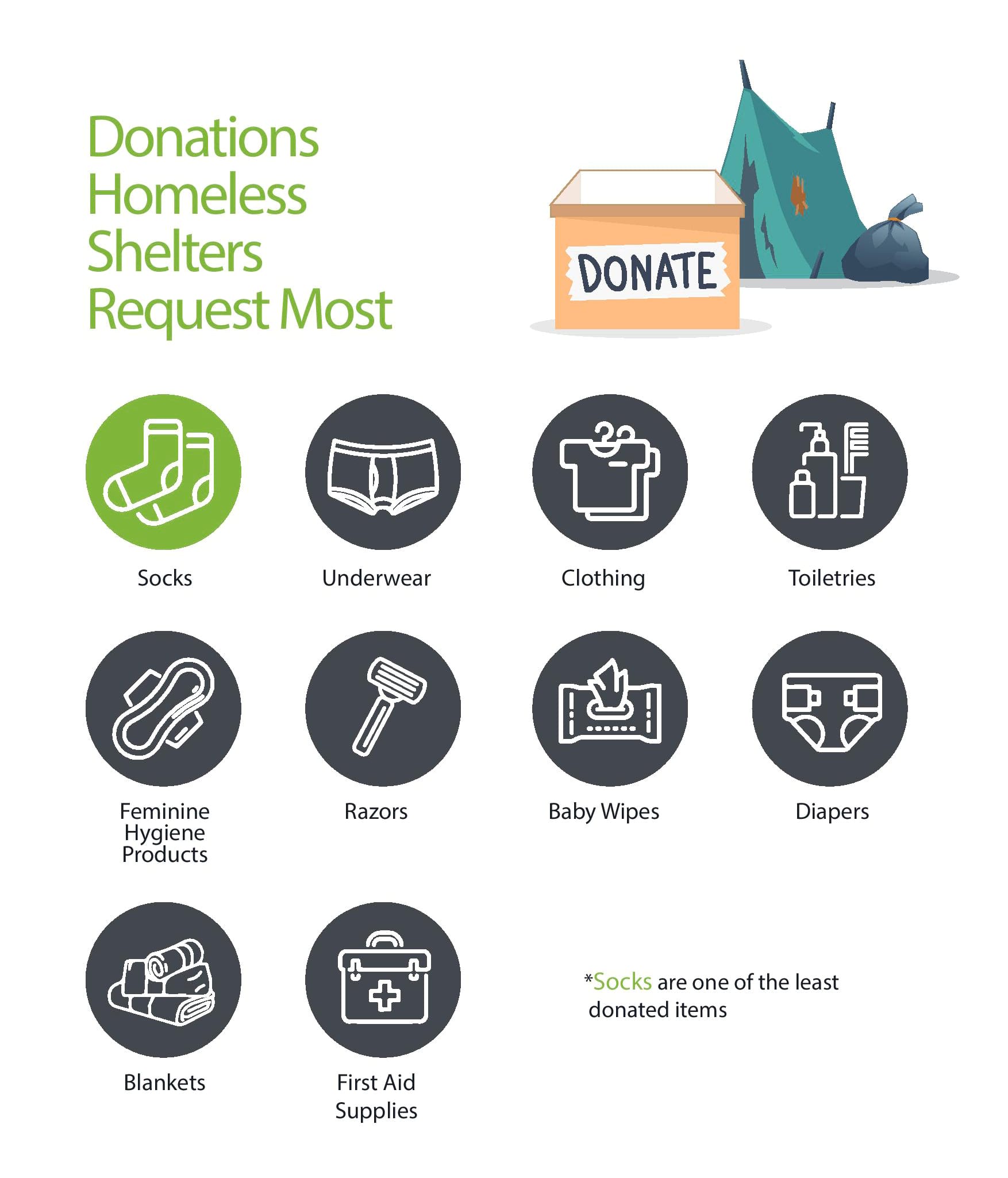 Other Resources to Support the Homeless Population

Socks are a great first step when it comes to helping people living with homelessness. The donation drive provides a simple way to show up and provide support that can be life-changing.

Though funded by government money, homeless shelters often depend heavily on fundraising and grants to stay open and provide care for all who need it.

If you are looking for other ways to support your local homeless shelter, you can:

People living with homelessness are at high risk of becoming a victim of assault or robbery, being separated from children and pets, and contracting an illness that can spiral out of control. In fact, the health crisis among the homeless population is escalating, with a number of incidents of local outbreaks of hepatitis A and hepatitis B popping up across the country.

A lack of health care, exposure to illness and germs, unsanitary living conditions, an inability to wash clothes or properly store food, eating food that may have expired, and other factors all contribute to high rates of health issues among people living with homelessness.

Foot health, specifically, is an ongoing topic of concern for people living on the street. It is normal to experience trench foot, festering wounds, frostbite, and other issues related to wet feet. Not only can foot problems be debilitating in and of themselves, but they can also inhibit the person’s ability to get to safety when needed, secure gainful employment, or care for themselves.

In extreme cases, poor foot health can be deadly.

It is for all these reasons and more that Footprints in Recovery is working hard to collect sock donations to pass along to locals living with homelessness.

It is easy to be part of this endeavor. You can:

Don’t wait to make a difference. Donate to the 3rd Annual Socks of Love Campaign today.